Are you the victim of Shigellosis related to a food poisoning outbreak? If so, this page is for you. Learn more about Shigella infections from the food poisoning lawyers at Schmidt & Clark, LLP. We are currently accepting new Shigella lawsuits in all 50 states. Contact us today for a free case review.
CONTENTS
Last Updated: April 8, 2022

A close cousin of E. coli, Shigella is a toxic pathogen that invades the colon, releasing toxins and causing inflammation. The released toxins cause the death of colon cells. With fewer than 100 Shigella cells needed to cause a full-blown infection, Shigella is a dangerous, potentially deadly bacterium.

Free Confidential Lawsuit Review
If you or a loved one had symptoms of shigella, you should phone/email our law firm immediately. Victims may be entitled to compensation by filing a lawsuit and our lawyers can help. Please click the contact form below for free advice or call our attorneys toll-free 24 hrs/day by dialing (866) 588-0600.

Shigella food poisoning is an acute medical infection caused by shigella bacteria, which affects the lining of the intestines. It causes cases of dysentery and generally occurs in temperate and tropical climates in developing countries with overcrowding and poor sanitation. Transmission can occur in humans after the ingestion of a relatively few numbers of cells of the bacteria, and shigella causes the most infectious type of bacteria-induced diarrhea. 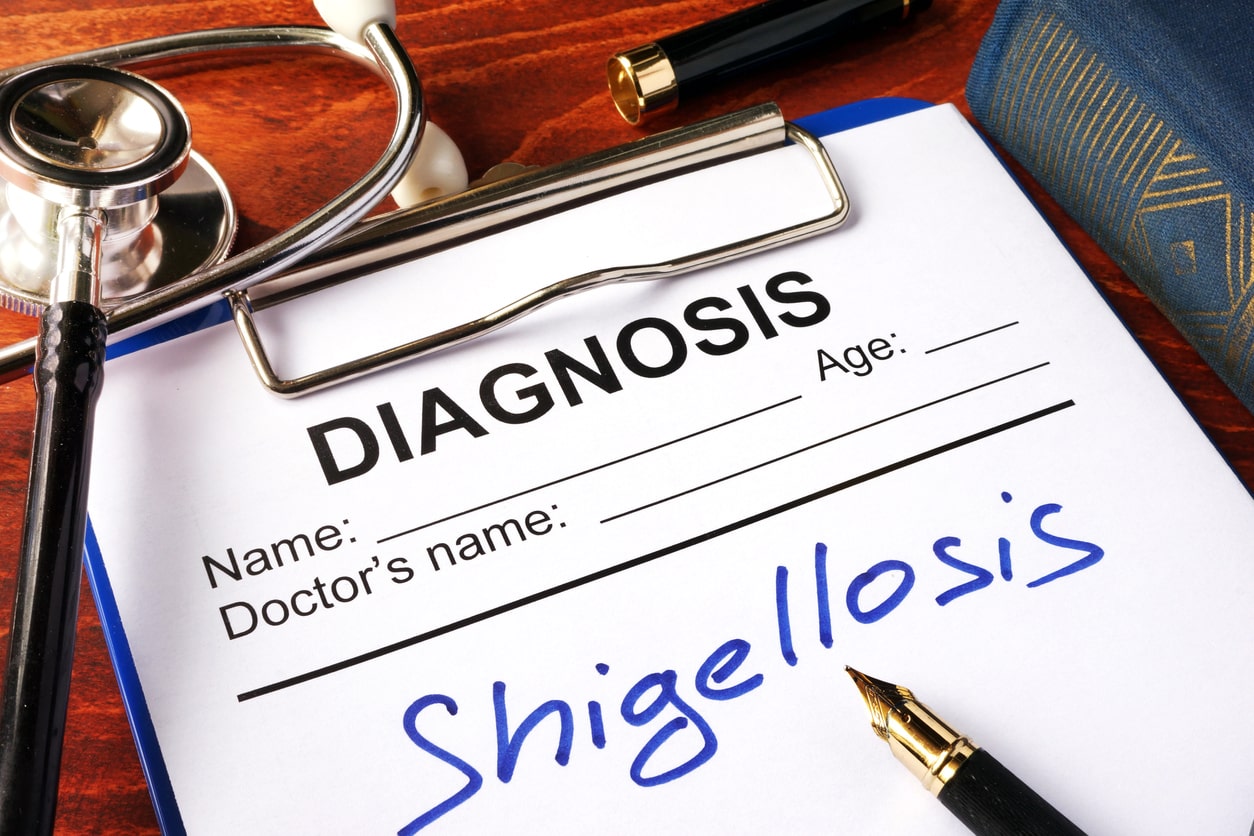 While most cases of shigella foodborne illness occur in the developing world, around 450,000 cases of the illness occur in the United States each year, according to the U.S. Centers for Disease Control and Prevention (CDC). The infection is most commonly found in daycare centers, nursing homes, and other similar places. Experts estimate that 70 people in the United States die annually from shigella and related complications, with the elderly and small children having the greatest risk of dying from the illness.

What is Shigella Bacteria?

Shigella is a genus of pathogen that is gram-negative, facultative anaerobic, non-spore-forming, nonmotile, and rod-shaped. The bacterium is named after Kiyoshi Shiga, who first discovered it in 1897. Shigella species are classified into 3 serogroups and 1 serotype:

Shiga toxin (Stx) is one of the most potent biological poisons known to man. Stx causes fluid accumulation in rabbits, renal damage in mice and baboons, and is lethal to animals upon injection. Humans encounter shiga toxin as a consequence of infection with Shigella bacteria dysenteriae type 1 or certain serogroups of E. coli such as the O157:H7. 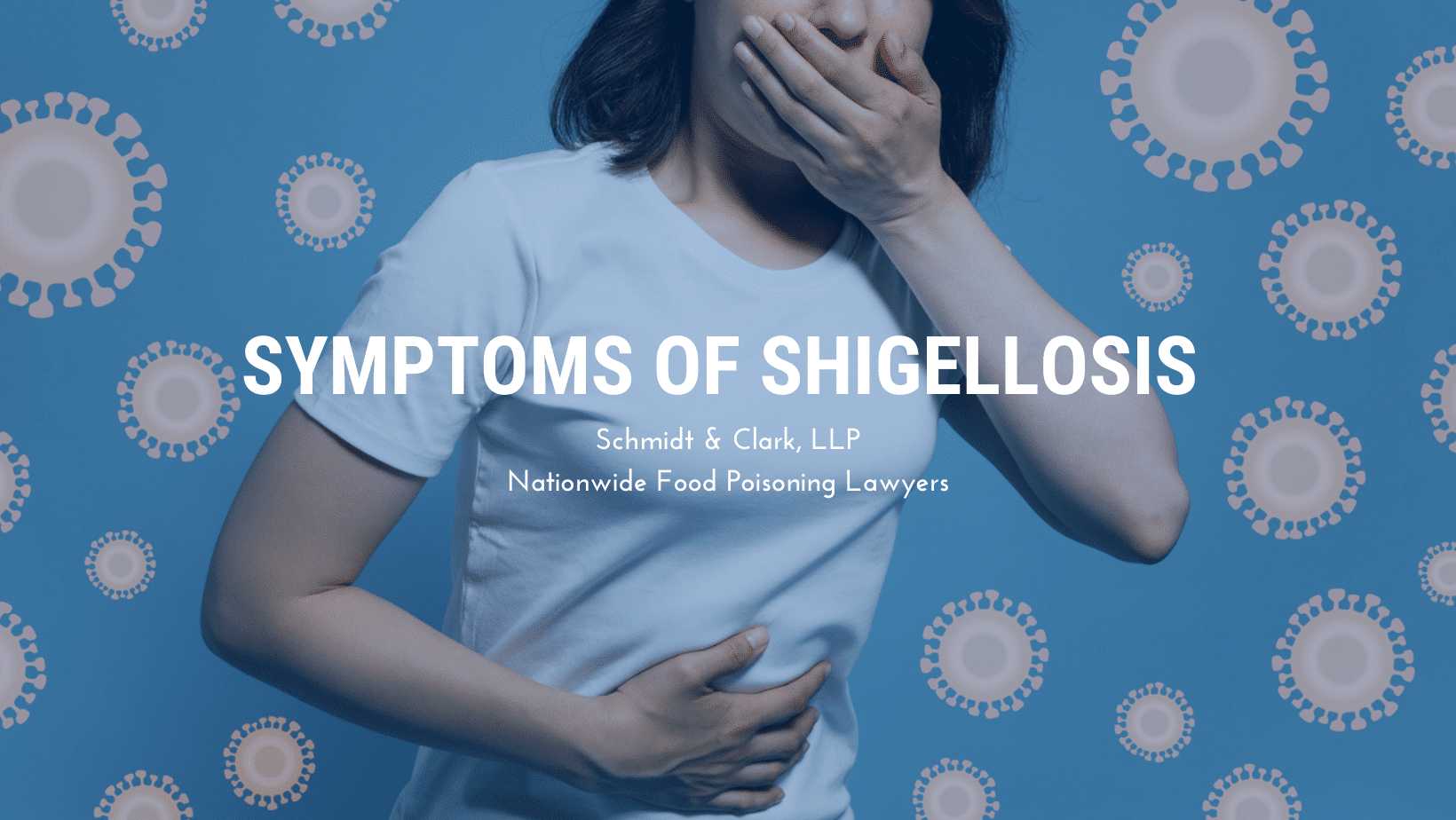 What are the Symptoms of Shigellosis?

Symptoms of Shigella infections can begin to appear an average of 3 days after ingestion of the bacteria. The severity of food poisoning symptoms can range from mild to extremely severe. Typical symptoms associated with the foodborne illness include:

How Can Shigella Infections be Diagnosed?

A doctor suspects shigella infections based on the typical symptoms of pain, fever, and watery or bloody diarrhea in people who are likely to have been exposed to the bacteria, according to the CDC. To confirm the diagnosis of shigellosis, doctors take a sample of stool and send it to a laboratory to grow (culture) and identify the bacteria. Bacteria are also tested to see which antibiotics are effective (a process called susceptibility testing).

Related Article: When to See a Doctor for Food Poisoning

How is Shigella Spread?

The shigella bacteria are spread to persons through fecal matter and can contaminate food or water, or transmission can occur directly through person-to-person contact. The illness caused by Shigella is common among young children of third world refugee camps, as well as in people who travel in the developing world. Drinking water contamination can occur in less developed countries, but unsanitary beaches and swimming pools in the United States can also become contaminated with the bacteria. Getting a small amount of the bacteria in the mouth is enough to cause the illness.

Most patients who get sick from shigella illnesses will make a full recovery without serious health complications. The individuals with the highest risk of contracted complications from shigella include small children, the elderly, and individuals with weakened immune systems. It is estimated that in nearly 40% of young children in daycare centers with cases of shigellosis, the illness will develop into encephalopathy with headaches, stomach pain, gastrointestinal distress, stiff necks, lethargy, confusion, or febrile seizures.

Hemolytic uremic syndrome, or HUS, is another serious health complication associated with shigella bacteria. Hemolytic uremic syndrome is a condition that causes acute kidney failure. HUS is identified by the destruction of red blood cells and the drastic reduction of the number of platelets in the blood. Experts estimated that shigella food poisoning is responsible for 6,000 hospitalizations in the US annually.

In most healthy individuals, the illnesses resolve in 2 to 7 days. The first line of treatment of food poisoning in sick patients is to replace the fluids lost through diarrhea. The second is to prevent the illness from spreading to others. Antibiotics are used to shorten the duration of serious symptoms as well as to prevent the spread of the disease. Anti-diarrheal medications are normally avoided as they can make the illness worse. Even after the affected individuals become recovered from the illness, the person’s bowel habits can remain abnormal for several months.

How Can Shigella Infections Be Treated?

Antibiotics can shorten the duration of the disease and kill the shigella bacteria. Shigella can be resistant to some antibiotics, so a doctor will perform a fecal test to see which antibiotics may help. Antibiotics commonly used to treat shigella are ampicillin, trimethoprim/sulfamethoxazole (Bactrim, Septra), ceftriaxone (Rocephin), or ciprofloxacin.

How Common is Shigellosis?

Shigella infections are particularly common and cause recurrent problems in settings where hygiene is poor and can sometimes sweep through entire communities. Shigellosis is more common in summer than winter. Children, especially toddlers aged 2 to 4, are the most likely to get severe dysentery associated with shigellosis from contaminated food.

When Can a Person With Shigella Come Back to Work?

Since shigella disease is found in the feces, people with diarrhea or dysentery should not go to school or work, according to the CDC. A person who is infected with shigellosis may return to school or work when they no longer have severe cases of diarrhea. Children who attend daycare should not return until diarrhea has stopped. If multiple children are ill at the daycare, the children and staff may be asked to stay at home until diarrhea has stopped for at least 24 hours. People who handle food safety should be treated, and have no shigella in their stools (2 negative stool cultures) before they return to work. This also applies to workers in schools, residential programs, daycare, and healthcare facilities who feed, give mouth care, or dispense medications to clients.

How Can You Prevent Shigellosis? 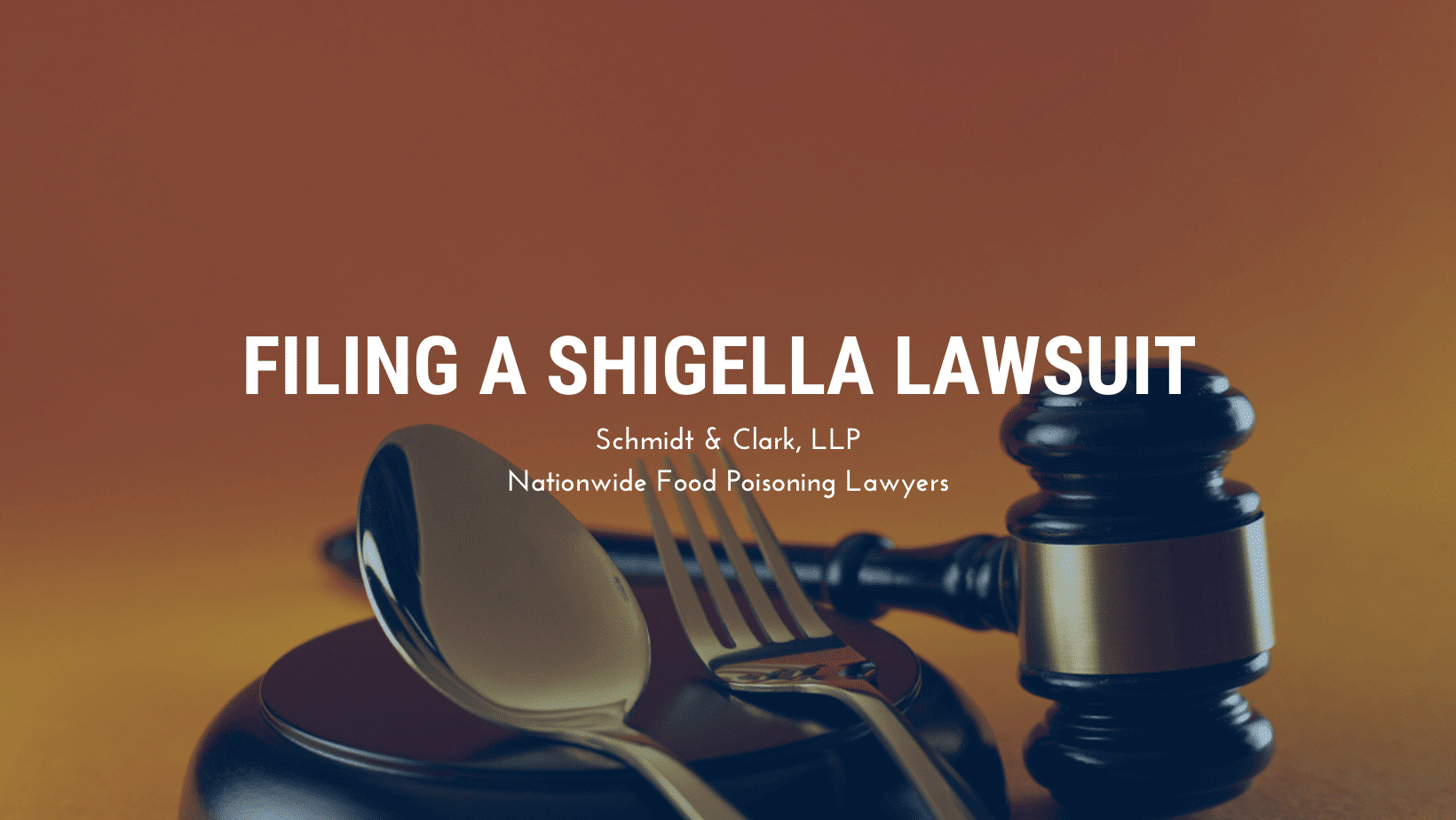 Can I Sue a Restaurant for Shigella Food Poisoning?

People who developed a shigella infection or associated complications like hemolytic uremic syndrome after eating at a restaurant may file a lawsuit against the establishment for their pain and suffering, lost wages, and more. Contact our law firm to talk to an attorney about your case. Tell us what happened, ask questions, and find out how to protect your rights. Call 866-588-0600 or use our confidential contact form below to get started now.

Were You Infected With Shigellosis?

When restaurant workers are careless, innocent people can get hurt. Food vendors need to be held accountable for their actions, and the shigella law firm at Schmidt & Clark, LLP, is up to the task. Our Shigella attorneys have recovered millions of dollars on behalf of our wrongfully injured clients. Now we stand ready to represent you. We understand the suffering you must be going through, and we are ready to fight for your rights and seek to recover the largest settlement possible in your case.

The Food Poisoning Litigation Group at our law firm is an experienced team of trial lawyers that focus on the representation of plaintiffs in Shigella Food Poisoning Lawsuits. Our law firm is handling personal injury litigation nationwide and currently accepting new food poisoning cases throughout the United States.

If you or a loved one had symptoms of shigella food poisoning, you should call a lawyer for a free consultation immediately. Victims may be entitled to compensation by filing a suit and our law firm can help.