The Centers for Disease Control and Prevention (CDC) estimates that at least 1.3 million food poisoning illnesses in the U.S. each year are caused by campylobacter, a bacterium that infects the gastrointestinal (GI) tract and causes severe fever, bloody diarrhea, and cramps.

If you have developed campylobacter food poisoning, it is critical to speak with an experienced attorney who can help protect your rights and seek compensation for your pain and suffering.

Free Confidential Lawsuit Review
If you or a loved one had symptoms of campylobacter food poisoning, you should phone/email our law firm immediately. You may be entitled to compensation by filing a campylobacter lawsuit and we can help. Please click the contact form below for a Free Consultation or call an attorney toll-free 24 hrs/day by dialing (866) 588-0600. 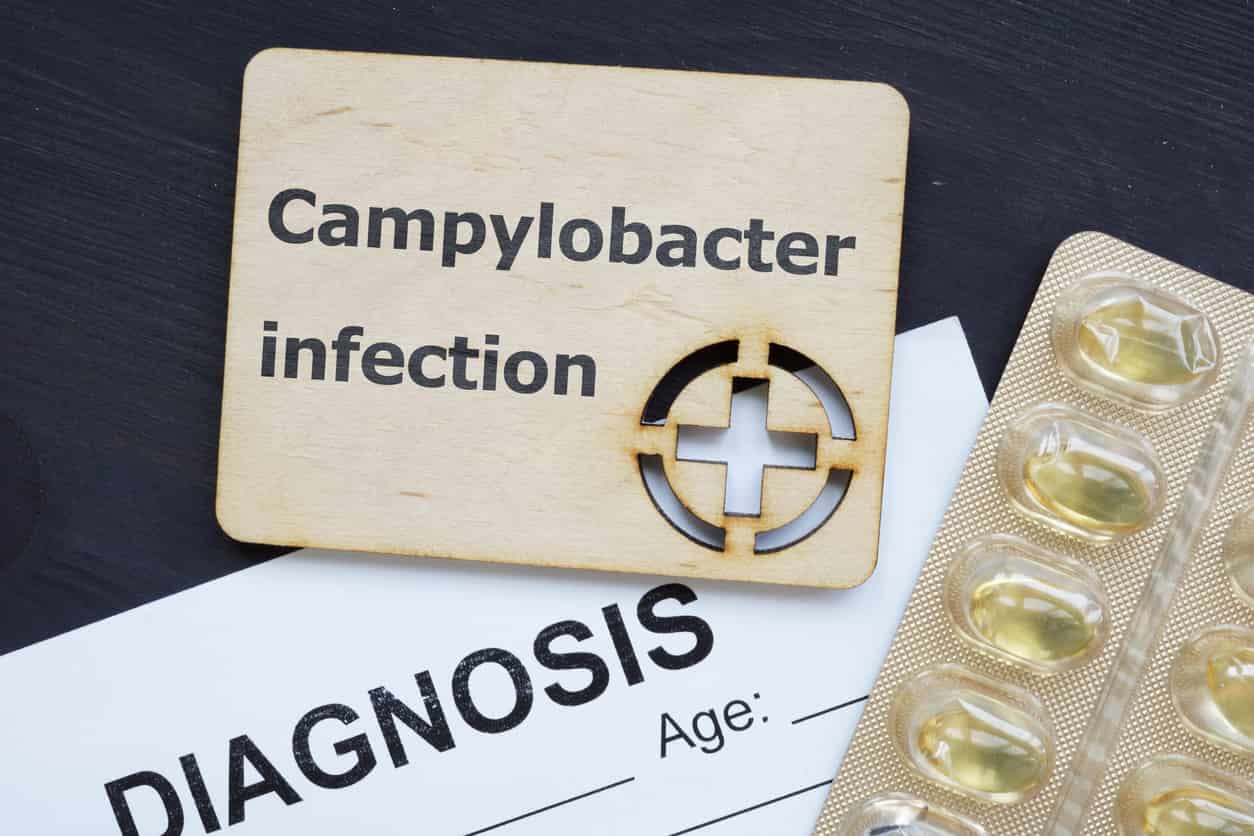 What is Campylobacter Infection?

Campylobacter infection, or campylobacteriosis, is caused by campylobacter bacteria. It is the most common bacterial cause of foodborne illness in the United States, according to the Centers for Disease Control and Prevention.

Data from the Foodborne Diseases Active Surveillance Network (FoodNet) indicate that about 20 cases are diagnosed each year for every 100,000 people. Many more cases go undiagnosed or unreported.

How is Campylobacteriosis Spread?

Eating undercooked poultry, meat, or eggs, or cross-contamination of foods, are common ways to be infected. Even one drop of juice from raw poultry or meat can have enough Campylobacter in it to infect a person.

Animals can also be infected. Some people get illnesses from contact with the feces of a sick dog or cat. Many chicken flocks are infected with campylobacter; however, individual birds show no symptoms of foodborne illness. When an infected bird is slaughtered, campylobacter can be transferred from the bird's intestines to its meat.

Campylobacter is not usually spread from one person to another, but this can occur if the infected person does not thoroughly wash their hands after using the bathroom.

Infected people will continue to pass the bacteria in their feces for a few days to a week or more. Certain antibiotics may shorten the amount of time the bacteria stays in the body. 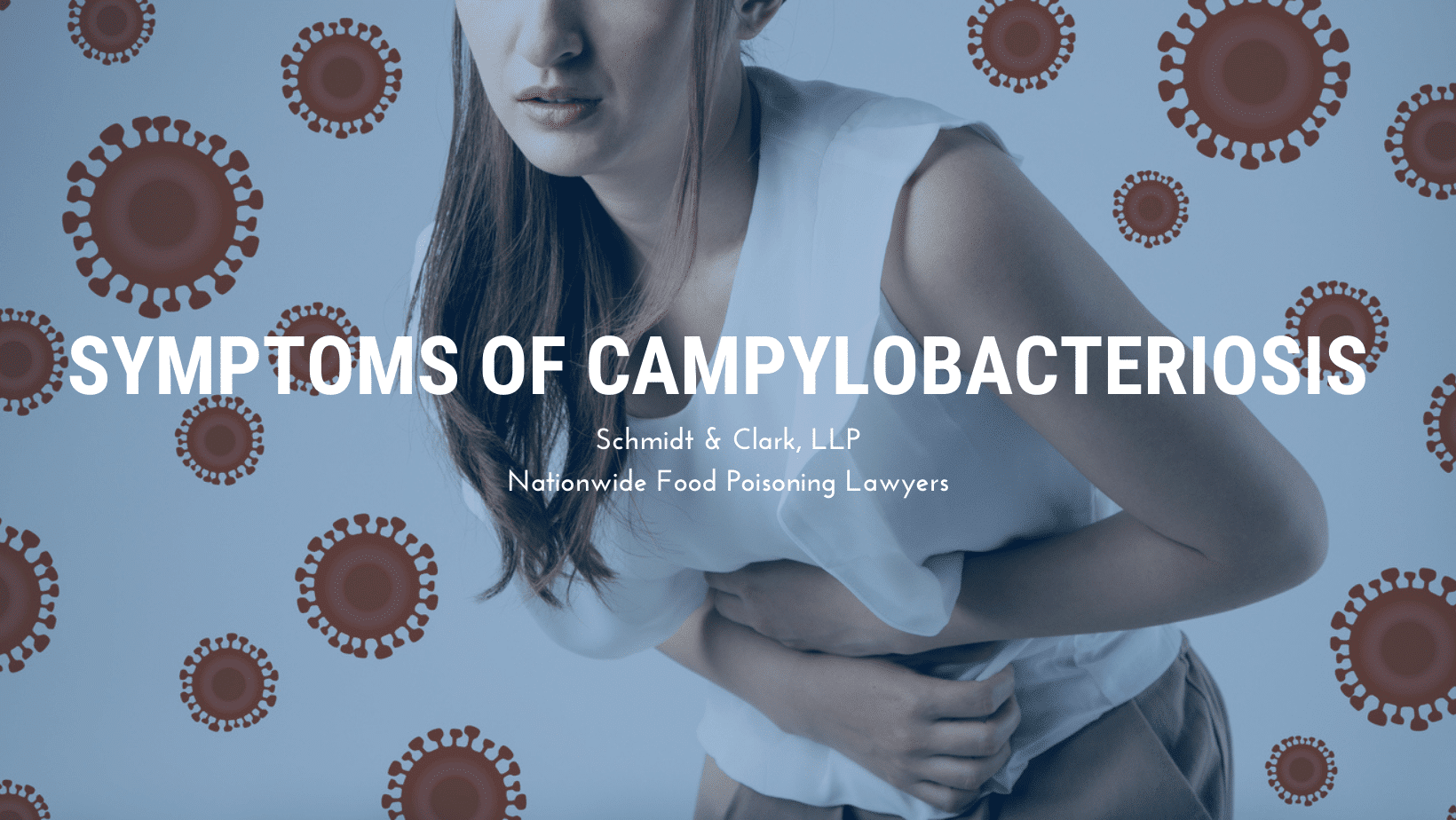 Signs and symptoms of campylobacteriosis injury include:

How is Campylobacter Diagnosed?

Campylobacter injury is detected when a laboratory test finds campylobacter bacteria in stool, body tissue, or fluids. The test could be a culture that isolates the bacteria or a rapid diagnostic test that detects the genetic material of the bacteria. 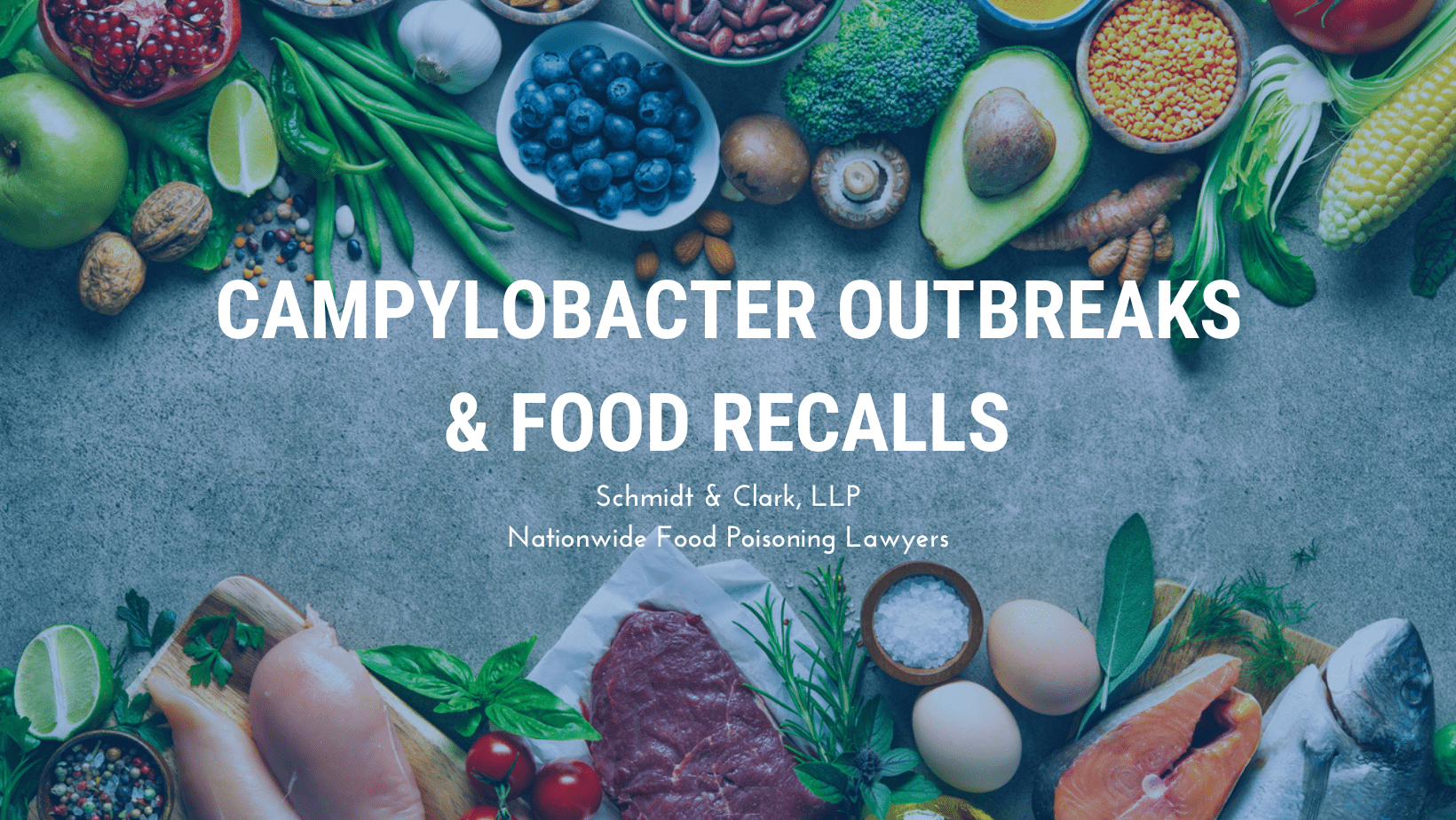 2019 multidrug-resistant outbreak linked to pet store puppies - 30 people from 13 states were infected with an outbreak strain of Campylobacter jejuni linked to puppies in pet stores [1]. Four hospitalizations were reported. Among 24 people with a jejuni injury who were interviewed:

2016–2018 multidrug-resistant outbreak linked to pet store puppies - 113 people from 17 states with laboratory-confirmed infections or symptoms consistent with Campylobacter infection were linked to contact with puppies sold through Petland stores [2].

2014 outbreak in Utah associated with raw milk - 99 campylobacter infections in Northen Utah linked to raw milk from a single dairy [3]. Patients ranged in age from 1 to 74 years (median = 23 years); 44 patients were aged <18 years. Reported symptoms were consistent with campylobacteriosis. All 99 patients reported diarrhea; among 84 patients with signs and symptoms available, the majority reported abdominal pain (65 patients) and fever (53).

2012 outbreak in Nevada associated with a muddy race - 22 campylobacter infections (18 probable and 4 confirmed) linked to a long-distance obstacle adventure race on a cattle ranch in Beatty, Nevada, in which competitors frequently fell face-first into mud or had their heads submerged in surface water [4]. Serious complications included fever, vomiting, and hemorrhagic diarrhea.

2012 outbreak in the northeastern U.S. associated with undercooked chicken livers - At least 4 people who ate chicken liver pâté at 2 separate Oregon restaurants were diagnosed with an outbreak strain of Campylobacter jejuni in their immune systems [5]. Both restaurants reported using undercooked raw chicken livers to prepare their pâté; an environmental health investigation revealed that the livers were purchased from the same U.S. Department of Agriculture Food Safety and Inspection Service (FSIS)–regulated establishment in the state of Washington.

2011 Guillain-Barré syndrome outbreak in the U.S. and Mexico associated with tap water - A cluster of suspected cases of Guillain–Barré syndrome was identified in San Luis Río Colorado, Sonora, Mexico, and Yuma County, Arizona [6]. An outbreak investigation identified 26 patients (18 from Sonora, 8 from Arizona) with the onset of GBS 4 May–21 July 2011, exceeding the expected number of cases (n = 1–2). Twenty-one (81%) patients reported antecedent diarrhea, and 61% of 18 patients tested were positive for C. jejuni antibodies.

Most cases of campylobacter food poisoning are mild and do not require professional medical treatment.

The contamination lasts for 5 – 8 days and typically goes away on its own.

In rare cases, abdominal illness can be serious and life-threatening. Health symptoms that are severe may respond to antibiotic treatment and anti-diarrheal medication may be administered to make the patient more comfortable.

Death from campylobacter food poisoning injury is more common when other diseases are present, such as liver disease or cancer.

What Happens if Campylobacter is Not Treated?

Some individuals suffering from a campylobacter food poisoning injury will develop a life-threatening health condition called Guillain-Barré syndrome, or GBS. This condition is the most common cause of acute cases of generalized paralysis of immune systems in the Western world. The complications occur when the antibodies that the body creates to attack the campylobacter cells start to attack the body’s nerve cells because they are chemically similar. Beginning at the feet and moving slowly throughout the body, GBS starts with fever and pricking sensations that turn into a weakness that can progress into paralysis. The condition can last for months and, even though most patients make a full recovery, victims can be left with severe neurological damage. Around 15% of individuals that contract Guillain-Barré syndrome remains wheelchair-bound or bedridden one year after contracting the illness.

Can I Go to Work With Campylobacter?

You should stay home from work if you are ill and have serious symptoms of campylobacter infection, as you may be infectious to other people. You can return to work or school once you have been free from diarrhea for 48 hours. You should tell your employer you have had campylobacter infection if you work with vulnerable groups such as the elderly, the young, those in poor health, or if you handle foods. Children should not attend school/childcare or play with other children until they are fully recovered and symptom-free for 48 hours.

Since campylobacter bacteria is spread through fecal matter, only people with diarrhea (loose stool) should be isolated. Most infected people may return to work or school when their feces become solid. People with diarrhea should be excluded from childcare, food handling and direct patient care until their symptoms have resolved.

What Can We Do to Outsmart Campylobacter?

You can help prevent serious campylobacter complications by:

Campylobacter infection rates increased by 12% in 2018 compared with 2015–2017, according to the Centers for Disease Control and Prevention. More campylobacter infections are probably being diagnosed because laboratories are using culture-independent diagnostic tests more often. It’s also possible that the number of infections is truly increasing. 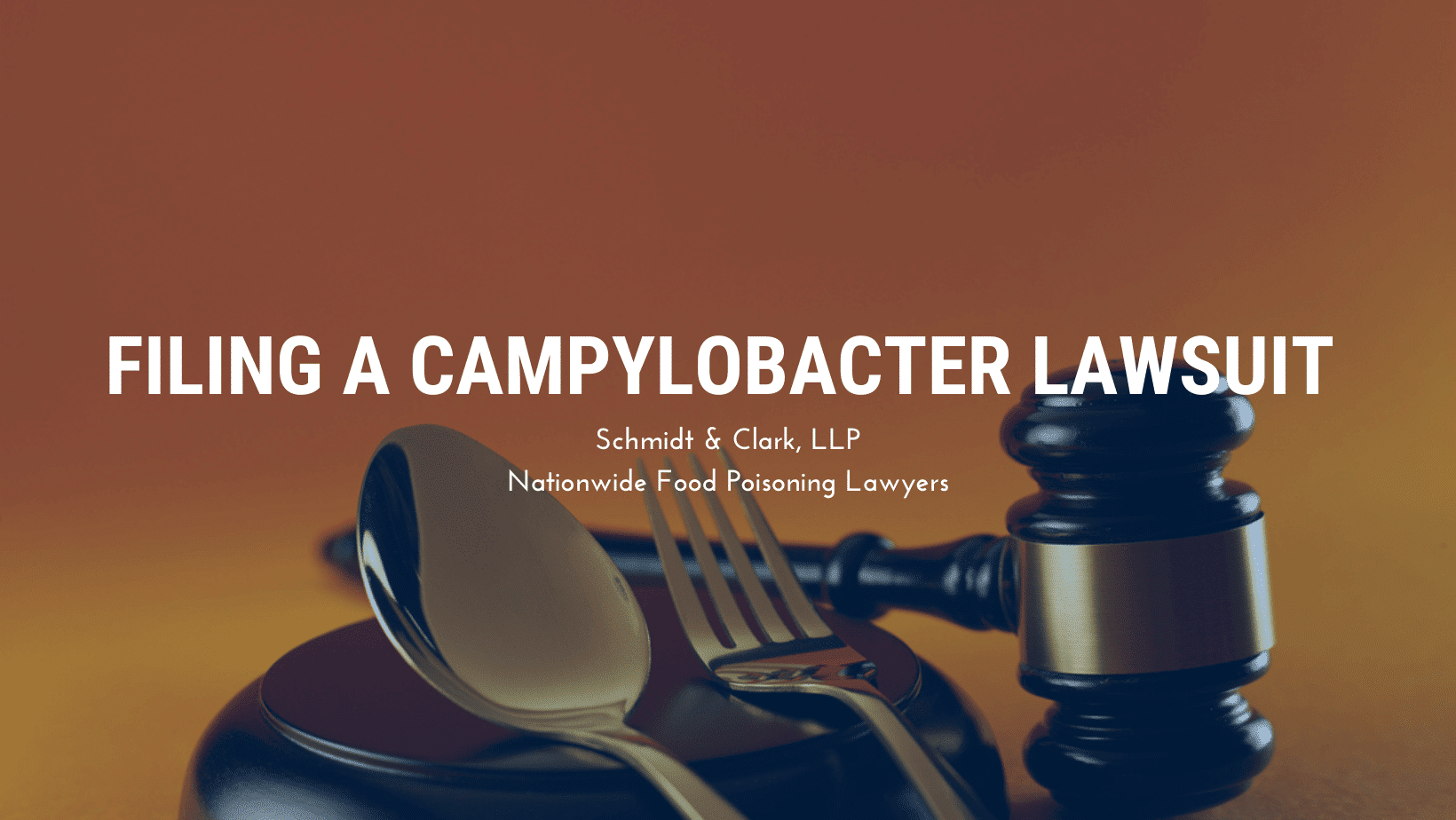 A food product contaminated with a pathogen is defective, and damages may be recovered by a campylobacter lawyer if a consumer is harmed as a result of eating the food. In most states, food is a "product" for purposes of product liability law, and the presence of a pathogen renders the food defective.

Plaintiffs seeking damages after exposure to campylobacter will need to prove that:

Since campylobacter may not develop right away but may take a few days to manifest, the causation element may be complicated to prove.

Proving causation starts with having a stool sample tested for pathogens before antibiotics are used. After the diagnosis, further tests will need to be done through pulsed-field gel electrophoresis. A key aspect of a case is finding evidence that implicates a particular manufacturer, food processor, restaurant, or food. Submitting this proof is easier if there is an outbreak among numerous people, all of whom ate the same food containing the pathogen. In some cases, it may be possible to build a case when multiple people eating at the same restaurant got sick, even if they did not all eat the same thing.

The Food Poisoning Litigation Group at our law firm is an experienced team of trial lawyers that focus on the representation of plaintiffs in Campylobacter Food Poisoning Lawsuits. Our law firm is handling individual litigation nationwide and currently accepting new food poisoning cases throughout the United States.

If you or a loved one had symptoms of a food poisoning illness, you should call an attorney for a free consultation immediately. You may be entitled to compensation by filing a suit and our law firm can help.