Step by Step Guide on How Bills Turn Into Laws

We all have that one thing we’d change about the society we live in.

Whether it’s something as small as larger fines for littering, or something more challenging like harsher sentencing for specific crimes.

These types of things can really affect the way we live – and improving the community we live in is an important part of building a better future.

Changing the law can be a tough process, and as they serve such an important role, it’s key that every detail is covered.

So it’s never as simple as we’d like to enact change for the things that mean the most to us.

Here at Schmidt and Clark, we understand your frustration.

No one likes to see something they’re passionate about, be blocked by red tape and bureaucratic barriers. It can really demotivate us to fight for what we know is right,

But knowing how these processes work can give us a head start if you’re ready to raise the issues that mean the most to you.

Throwing out the legalese and making it easy to understand, we’ve put together a step by step explanation of how a bill turns into law.

To start us off, the ideas for new bills need to be found. To do this, members of congress need the voice of the people.

You don’t have to have a degree in law to participate in law making. In fact, anyone can come up with an idea for a new bill.

Members of congress will often meet up with townspeople who know best. Living in the community, they have the best eyes and ears needed to identify problems and issues in their area, and want something to be done about it.

Once the member of congress has the idea prepared that they want to turn into a law, they take it to the next step.

Introducing your idea as a ‘bill’, they refer the bill to a committee.

The bill must then be approved, but that’s no easy task. Convincing both houses is necessary for your idea to be heard by the big names, so getting the nod of approval from the Senate or the House is key.

But where do they go to get this approval?

Bills can start in either the Senate or The House of Representatives – but usually the Senate.

If a bill is initially sent to the senate, it will go through to the Senate Parliamentarian who will assign it to a committee (or even kill the bill right there on the spot) the selected committee will write the bill up in legal language, after consulting with all kinds of experts and stakeholders before holding a markup and ultimately voting on it. If the bill wins ‘the majority’ it gets passed onto the floor of the Senate.

Once the bill is passed to the floor of the senate, the rules for the debate are made, including how long the debate will be and if it’ll be a closed rule or an open rule.

Open Rule: An open rule allows amendments to be made to the bill. Opponents of the bill will commonly add clauses that make it difficult for the proponents to vote for the bill, which makes it considerably harder for the bill to get passed.

Closed Rule: No amendments can be made to the bill, making it easier to be passed.

If the bill wins the majority of votes in the Senate, it then gets passed onto The House of Representatives.

Similar to when the bill initially gets sent to the Senate, before reaching the floor of The House it must pass through the rules committee, who ‘reports it out’ to The House of Representatives.

To pass the house, the bill has to win the majority of votes – which is 238 or more, it passes.

Is it really that simple though? Usually not.

To be passed to the president, the exact same bill must be passed by both houses. The second house for the bill to pass through, whether it be the Senate or The House of Representatives will likely want to make changes.

In this case, it goes to a conference committee which…you guessed it, is made up of members of both houses.

They usually take the changes both houses want to make and create a new version of the bill (a compromise bill). This bill will get sent to both houses – if it passes, it gets sent to the president.

Step 5: Over To The President

After all that – it all comes down to one last decision, the POTUS can either approve the bill and it becomes law, or veto it – which means it’s essentially, back to the drawing board. 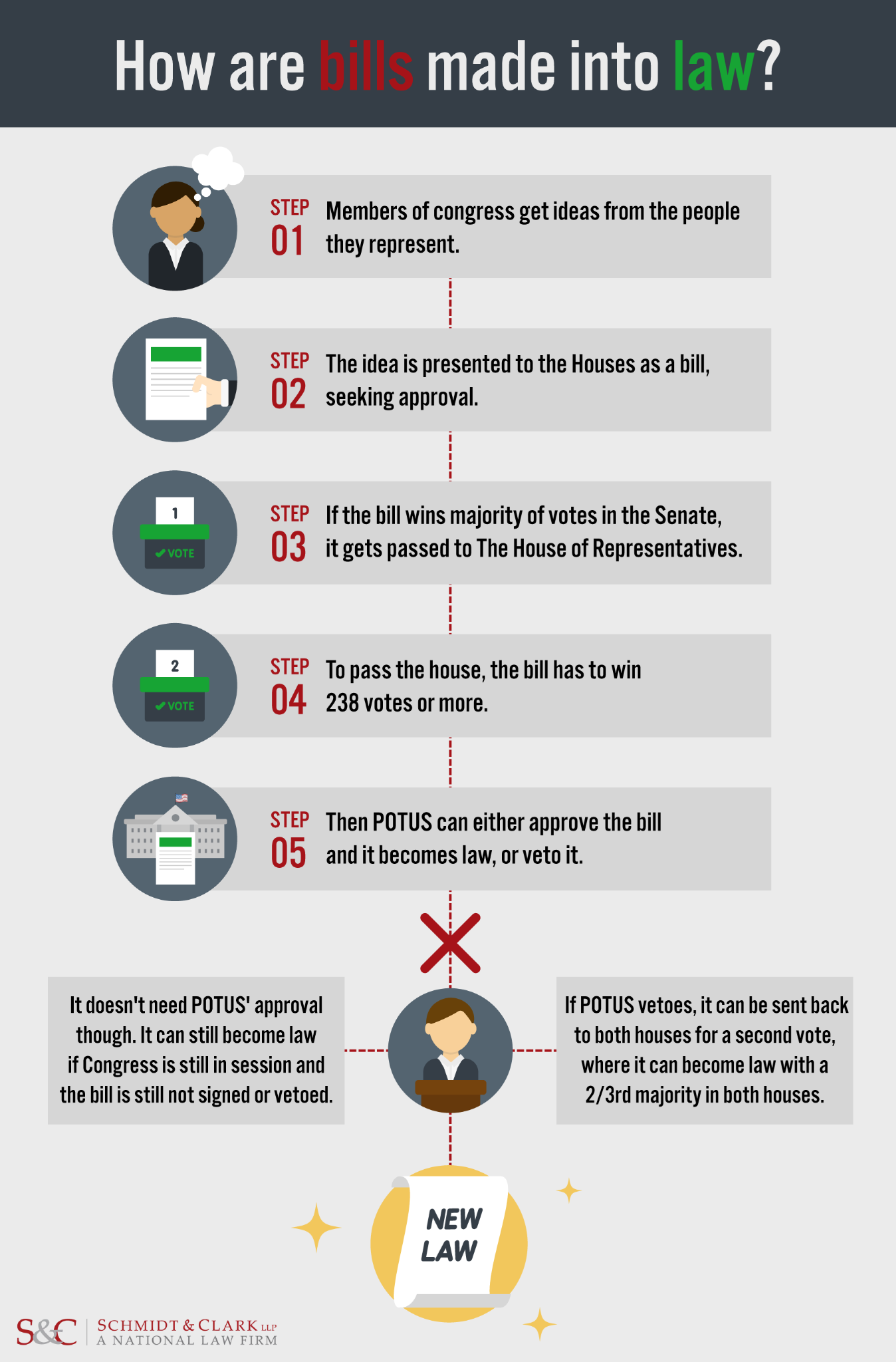 He could also ‘pocket veto’ it – which is only available at the end of a congressional term. If the president decides to either sign or vetoes a bill or Congress goes out of session within the next 10 days, the bill will not become a law. This is used only when the president doesn’t want the law to pass, but due to political reasons, doesn’t want to veto it either.

However, you might not need the President’s signature anyway

If Congress passes over the bill before this 10 day period, and the president neither signs or vetoes it within the 10 days, and congress is still in session – the bill will still become a law.

If a bill is vetoed by the president it still has an (albeit rare) chance of being passed, it can be sent back to both houses for a second vote, if it gets a 2/3rd majority in both houses – the bill becomes law.

So now that you’ve skipped all the boring language and skipped straight to the facts, you know how to get your ideas heard.

Speak to your representative, and follow your idea all the way through the Houses to the President!