Are you the victim of Norovirus related to a food poisoning outbreak? If so, this page is for you. Learn more about Norovirus infections from the food poisoning lawyers at Schmidt & Clark, LLP. We are currently accepting new Norovirus lawsuits in all 50 states. Contact us today for a free case review.

The Centers for Disease Control and Prevention (CDC) recently reported that a new strain of norovirus has been discovered and that the United States experiences more norovirus outbreaks than most other countries, making it important to consult a seasoned attorney if you’ve become ill with the virus. At Schmidt & Clark, LLP, we’re passionate about your health and well-being.

Free Confidential Lawsuit Review
If you or a loved one had symptoms of a norovirus personal injury, you should phone/email our law firm immediately. Victims may be entitled to compensation by filing a lawsuit and we can help. Please click the contact form below for free advice or call an attorney toll-free 24 hrs/day by dialing (866) 588-0600. 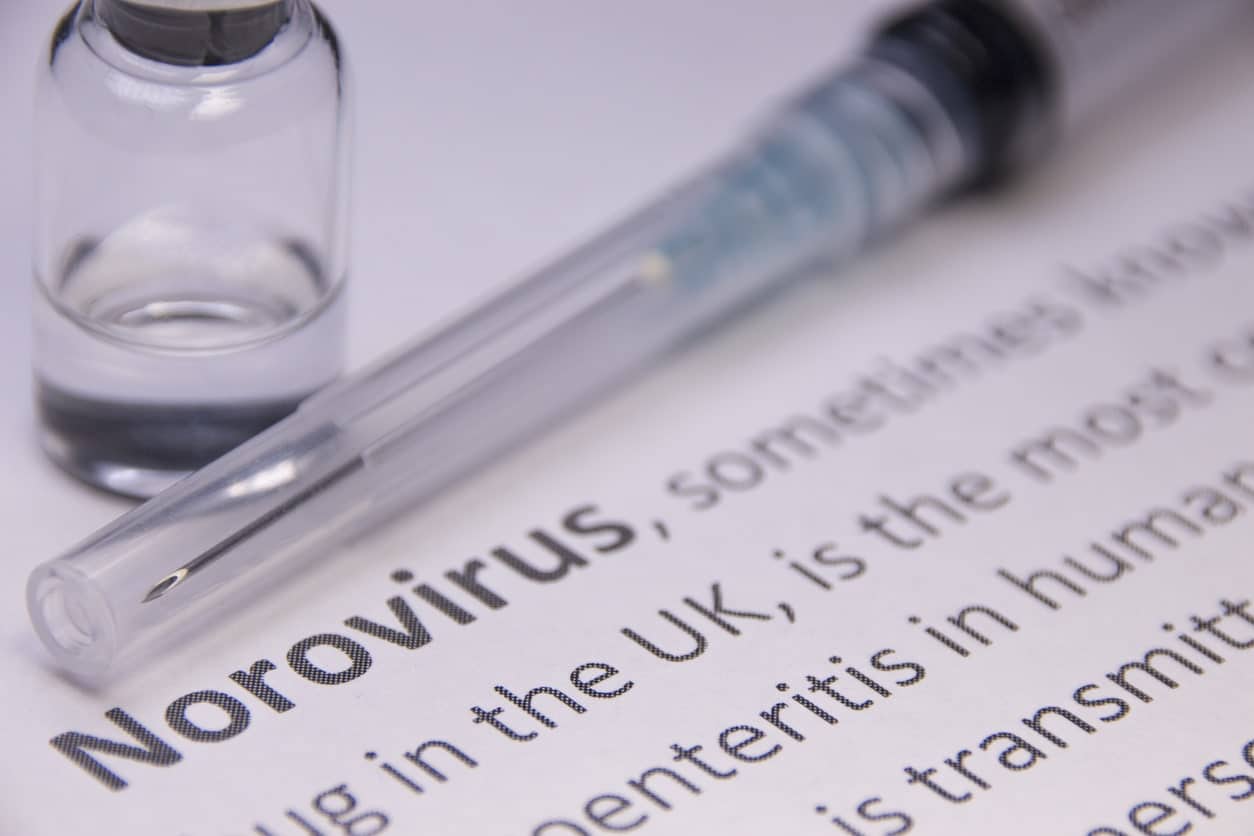 Although it is not always the cause of food poisoning, it is often the cause — in fact, the CDC estimates that norovirus causes more than 20 million cases of gastroenteritis illness every year in the U.S.

There is no vaccine to prevent the illness, no treatment once the illness begins (antibiotics do not help viral infections), and a person does not develop immunity after they are infected.

Each year in the United States, norovirus causes an average of: 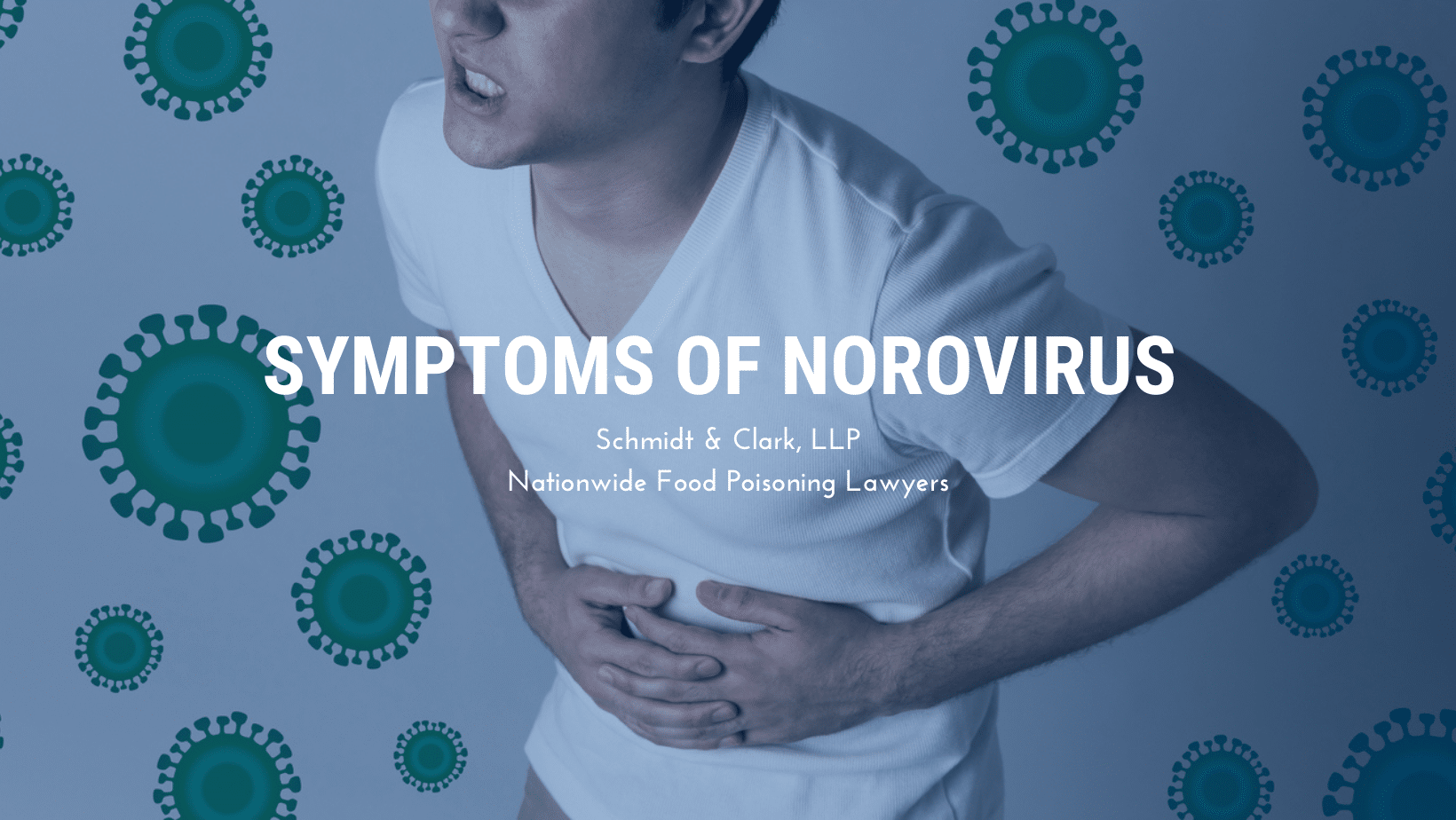 What are the Symptoms of Norovirus?

It is estimated that nearly 23 million people in the U.S. suffer acute gastroenteritis from norovirus every year, according to the Centers for Disease Control and Prevention.

The most common food poisoning symptoms of an infected person include:

Usually, a person will first start noticing the signs of a viral foodborne illness within 1 to 2 days after ingesting or coming into contact with contaminated water or food.

The symptoms of a gastroenteritis illness can last up to 5 days and cause significant personal injury including malnutrition, dehydration, or potentially even death. Young children and older adults contaminated with norovirus tend to experience severe illnesses, as do people with a compromised immune system, especially those in nursing homes or hospitals.

How is Norovirus Diagnosed and Treated?

Norovirus infection can be diagnosed based upon a medical patient's symptoms or the results of a stool sample. Treatment involves rest and fluids to replenish those lost through vomiting and diarrhea.

In cases where individuals are unable to hold any food or water down without vomiting, intravenous fluid may be recommended. Viral anti-diarrhea medications may also be prescribed, especially in elderly individuals who are over the age of 65.

To alleviate the frequency of vomiting and diarrhea, consuming the following food poisoning treatments of bland ready-to-eat foods can help:

What To Do After a Norovirus Diagnosis

As stated earlier, there's no specific treatment commonly used for norovirus infection, and properly recovering usually depends on the health of your immune system. In most people, the illness usually resolves within a few days. However, it is required for all individuals to replace lost fluid.

Oral rehydration solutions may be used. If you're unable to drink enough fluid to prevent dehydration, you might need to receive fluids through a vein. Your doctor also might recommend over-the-counter anti-diarrheal medication.

Yes. You can be contagious from a few days up to 2 weeks or more, depending on which virus is causing your gastroenteritis. The contagious period — the time during which a sick person can spread the illness to others — differs slightly for each virus.

With norovirus, you're usually contagious when you begin to feel ill and vomit. Symptoms usually appear within 1 to 2 days of exposure. Although you typically feel better after a day or two, you're at risk of spreading the virus for a few days after you properly recover. The virus can remain in your stool for a lengthy time of up to 2 weeks or more after transmission.

Should I Stay Home if I Have Norovirus?

In most cases, you should stay home or keep your kids home for 24 hours to three days after the symptoms of the illness subside.

This includes acute vomiting, diarrhea (loose stool), and fever. If your child is running a fever, he or she is more likely to spread germs to people they come into contact with. Even without a fever, stomach viruses are highly infectious and spread easily from person to person when you have symptoms.

It can be tempting to send your child to school if they went all night without significant complications, but waiting a full 48 hours after the last episode occurred is important because the symptoms could return. If you make it a full day and night with no severe symptoms, it is unlikely that they will reappear after that.

How Long Should You Avoid Someone With Norovirus?

You can get norovirus or another serious stomach flu from having direct contract with another infected person (i.e. kissing, sharing foods, or eating utensils with someone who is infected).

When people infected with norovirus vomit, they produce virus fragments into the air that can infect other people, according to a 2015 study published in PLOS ONE. Norovirus is often called the "cruise ship" virus due to numerous outbreaks at sea.

Researchers created a device that simulated vomiting and used fake vomit contaminated with virus fragments similar to norovirus. Their experiments showed that vomiting releases virus particles into the air.

"When one person vomits, the aerosolized virus particles can get into another person's mouth and, if swallowed, can lead to infection," said study co-author Lee-Ann Jaykus, of North Carolina State University.

The symptoms of gastroenteritis include nausea, vomiting, and/or diarrhea accompanied by abdominal cramps. Some people also complain of headaches, fever, chills, and muscle aches. Symptoms are usually brief and last only 1 or 2 days.

However, during that period, people can feel very ill and vomit, often violently and without warning, many times a day. Symptoms usually begin 24 to 48 hours after ingestion of the virus but can appear as early as 12 hours after exposure. 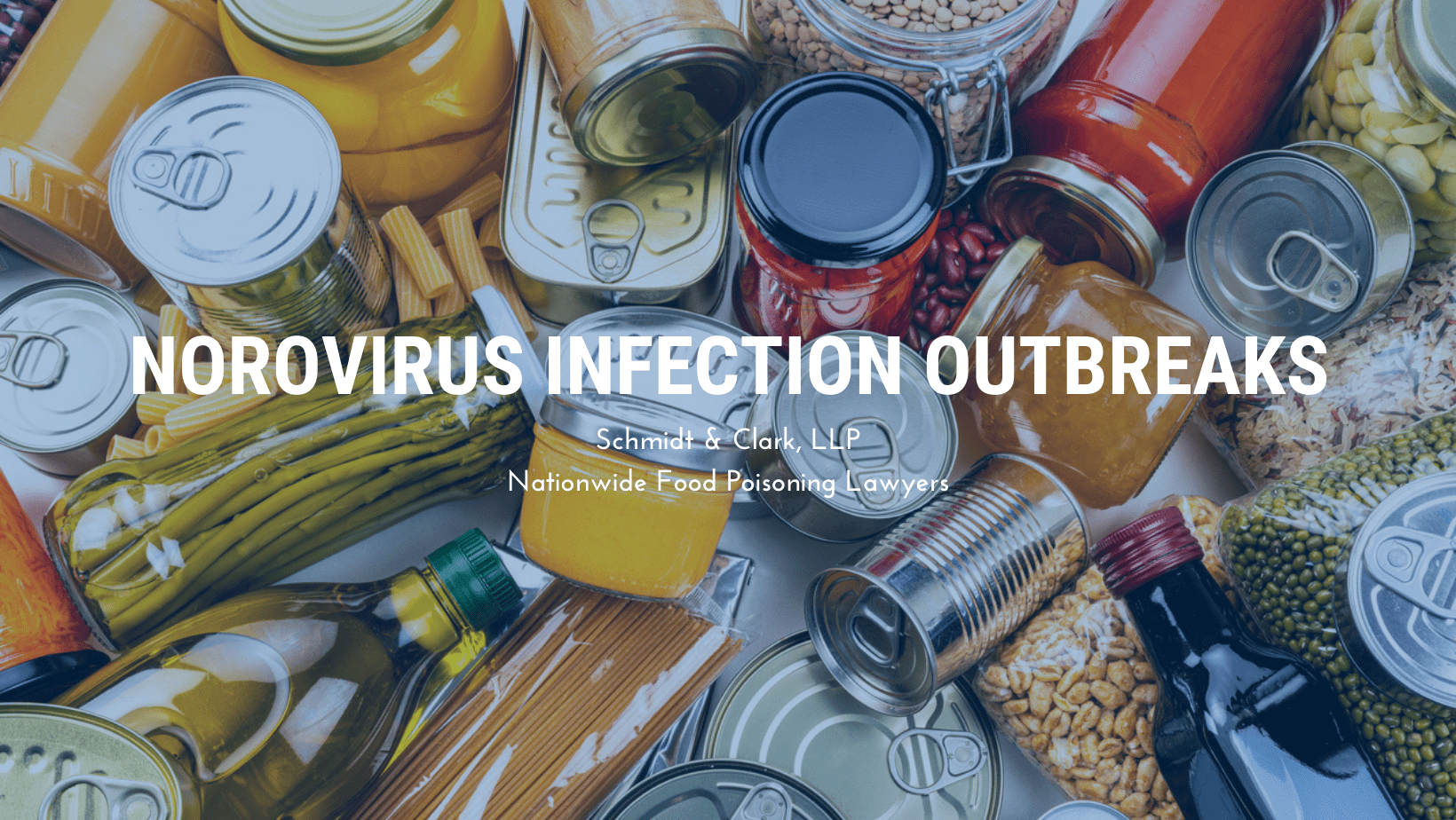 Some of the most commonly reported settings associated with norovirus outbreaks include:

Can Norovirus be Prevented?

You can help protect yourself and others from norovirus by washing your hands thoroughly with soap and water and following the simple prevention tips below. There is currently no vaccine to prevent norovirus; although, this is an area of active research.

A person can become infected with norovirus more than once. Although there is a short period of time (likely a few months) immediately following infection with norovirus that a person is protected from reinfection, it is only temporary protection.

Some food safety tips that can help food from becoming contaminated with norovirus include: 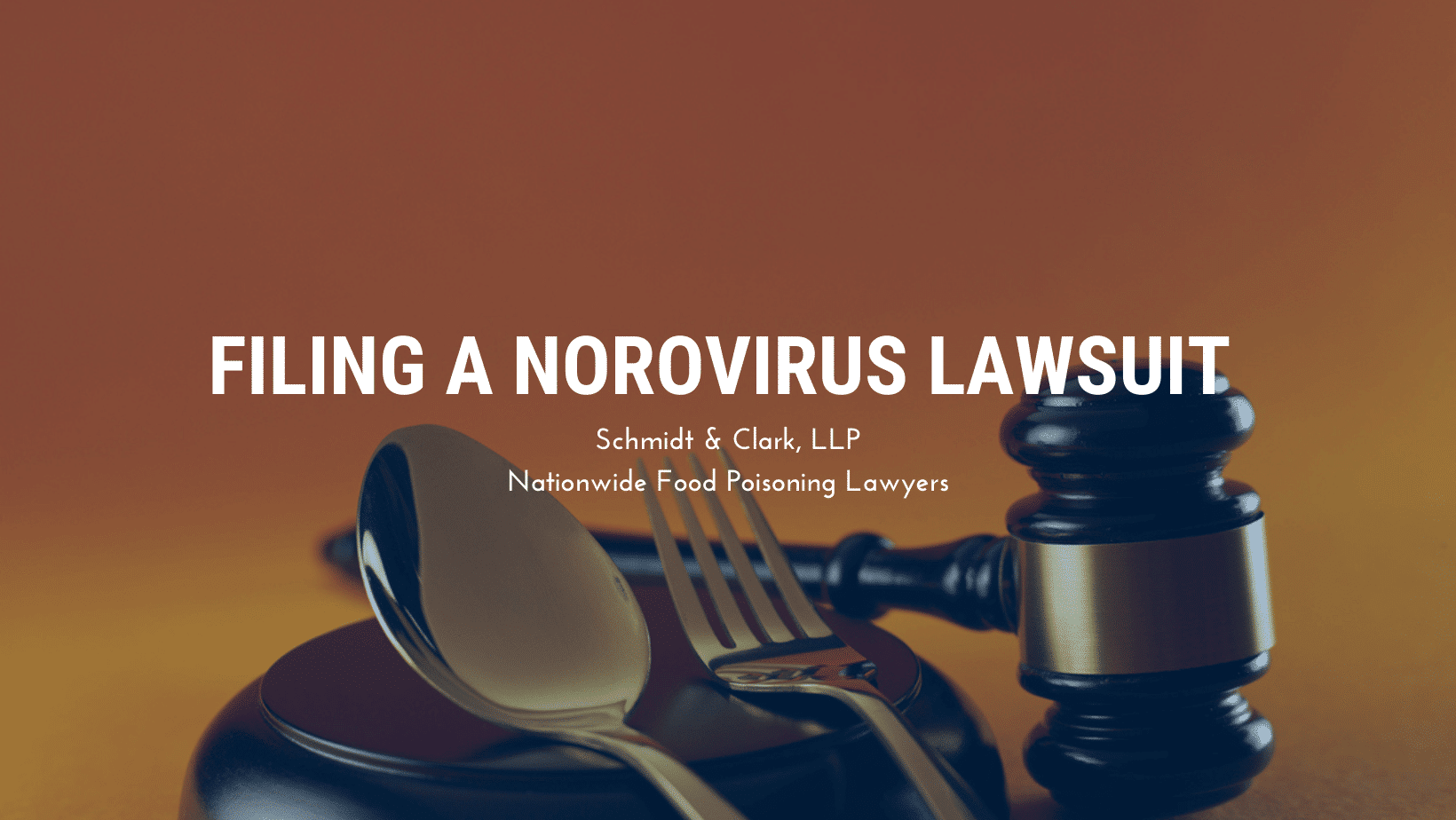 Why Should I Hire a Norovirus Lawyer?

If you become sick with a norovirus infection that you believe was caused by contaminated food or an infected food worker, be sure to seek medical treatment right away. In many cases, norovirus can cause dehydration, which if not treated properly, can lead to hospitalization and even death.

While most people recover from a norovirus foodborne illness in a few days, those who become extremely ill and are hospitalized or develop complications may face expensive and lengthy medical treatment.

Successful litigation against those negligent parties responsible for your illness can help compensate you for these costs and any ongoing treatment that may occur.

Get a Free Norovirus Lawsuit Evaluation With Our Lawyers

The Food Poisoning Litigation Group at our law firm is an experienced team of trial lawyers that focus on the representation of plaintiffs in Norovirus Food Poisoning Lawsuits. Our law firm is handling personal injury litigation nationwide and currently accepting new food poisoning cases throughout the United States.

If you or a loved one had symptoms of a norovirus infection, you should call a lawyer for a free consultation immediately. Victims may be entitled to compensation by filing a suit and our law firm can help.