The FDA, CDC, along with state and local officials are investigating a multi-state outbreak of a rare outbreak of intestinal illnesses caused by the bacterium Cyclospora cayetanensis to salads sold at McDonald’s restaurants.
Last Updated: April 6, 2022

August 24, 2018 – A total of 507 laboratory-confirmed cases of cyclospora infection in 15 states have been linked to contaminated McDonald’s salads, according to an FDA update [1] issued Thursday. Consumers who have symptoms of cyclosporiasis (listed below) should contact their healthcare provider immediately to report their symptoms and receive care.

FDA analysis [2] of an unused package of Fresh Express salad mix that was distributed to McDonald’s has tested positive for cyclospora, though the expiration date for that product, July 19, had already passed. On July 27, the agency informed Fresh Express of the results.

FDA instructed Fresh Express to determine whether potentially contaminated salads may still be on the market. The firm disclosed that the romaine from the same lot as the positive sample was not packaged for direct retail sale by Fresh Express and had already expired. Fresh Express committed to using recall procedures to inform those companies that received this romaine about the sample result. 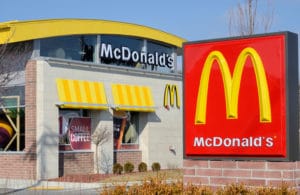 Image of a McDonald’s potentially linked to food poisoning outbreak

Free Confidential McDonald’s Food Poisoning Lawsuit Evaluation: If you or a loved one developed symptoms of food poisoning after eating at McDonald’s, you should contact our law firm immediately. You may be entitled to compensation by filing a suit and our lawyers can help. 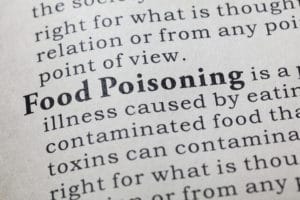 Signs and symptoms of cyclosporiasis may take up to a week to manifest — making proper identification and diagnosis of the illness problematic — and include:

“The initial investigation indicates a link to consumption of McDonald’s salads produced for McDonald’s restaurants,” the Illinois Health Department wrote in a press release. “Approximately one-fourth of Illinois cases reported eating salads from McDonald’s in the days before they became ill.”

In a written statement to BuzzFeed News, McDonald’s said the company “… has been in contact with public health authorities from Iowa and Illinois about an increase in Cyclospora infections in those states. Out of an abundance of caution, we decided to voluntarily stop selling salads at impacted restaurants until we can switch to another lettuce blend supplier.”

McDonald’s went on to say it was in the process of removing all remaining salad blends from its 3000+ restaurant inventory in the Midwestern U.S. Health authorities are cautioning anyone who ate a salad from McDonald’s since mid-May and experienced diarrhea and/or fatigue to call their doctor right away.

August 9, 2018 – As of Friday, at least 436 confirmed cases of Cyclospora infection have been reported from McDonald’s patrons in 15 states who consumed salads shortly before getting sick, according to an FDA update [3] posted today. The investigation is ongoing and the FDA is currently reviewing distribution and supplier information for romaine lettuce and carrots.

July 26, 2018 – At least 286 cyclospora food poisoning cases in 15 states [4] — including 11 hospitalizations — have been linked to contaminated salads sold at McDonald’s restaurants, according to the FDA. This total is up at least 123 cases since last Friday, the agency says.

July 20, 2018 – At least 163 cyclospora food poisoning cases in 10 states — including 3 hospitalizations and no deaths — have been linked to contaminated salads sold at McDonald’s restaurants, according to the U.S. Centers for Disease Control and Prevention (CDC). FDA is working with McDonald’s to identify the salad ingredients making people sick and to trace them through the supply chain.

7/14/2018 – When this food poisoning outbreak at McDonald’s initially started, it was centered around the Illinois Health Department, which confirmed at least 90 cases of cyclospora food poisoning (cyclosporiasis) from McDonald’s salads.

Since that time, The FDA, CDC, along with state and local officials have increased their investigation into a “multi-state outbreak of cyclosporiasis illnesses”.

See all the food poisoning cases we’re taking on.

Do I Have a McDonald’s Salad Lawsuit? 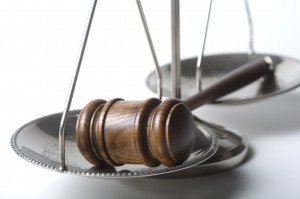 The Food Poisoning Litigation Group at our law firm is an experienced team of trial lawyers that focus on the representation of plaintiffs in McDonald’s salad lawsuits. We are handling individual litigation nationwide and currently accepting new cyclospora food poisoning cases in all 50 states.

Free Case Evaluation: Again, if you got sick after eating a McDonald’s salad, you should contact our law firm immediately. You may be entitled to a settlement by filing a lawsuit and we can help.